So this evening we ate a lovely chicken pot pie. Dustin covered his and boys in cheese. We ate ours very quickly, but boy was having issues. Dustin was getting frustrated after boy refused to eat after the dessert bribe. So I sat with him and fed him. Yep I was feeding a four year old boy. He ate a couple bites quite nicely then I gave him one in which he spied the dreaded CRUST Oh how vile! He pitched a fit and wouldnt swollow. He sat and cried with this bite in his mouth, not wanting to spit it out for fear of a spanking, and not wanting to swallow for fear of being poisened from the way he was acting. I had such a dificult time keeping a strait face. I called my mom laughing to tell her I knew how she felt with my brother and I (my sister usually ate all her food with no issues). Oh I love parenting! I gave him water so he could swallow and it took him 4 tries to get it down, with a few gags thrown in. When he ate the rest of the "insides" he did get his icecream. I figured I would rather him eat chicken and veggies than the crust anyways. After all of this he slowly dozed off on the couch beside me.
He has turned into such a dramatic little guy. 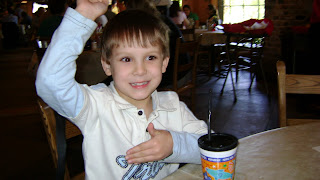 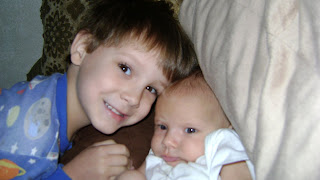